Did I mention busy?

For earlier diary entries, go to the Spd D8n page.

After the languorous postings about the writing process, the rehearsal period has flashed by far faster than I blog.

So fast, that tomorrow is Opening Night. Holy funk-monkeys!

With only minimal moves to block, Spd D8n has had a short rehearsal period. It’s the memorisation load with this one, as the cast mention to me in varying degrees of passive aggression and cold stares.

So, what’s been happening? 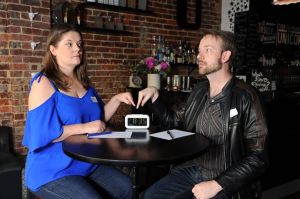 Joanne and Tom debate the pros and cons of snooze buttons

9am on a Sunday, the cast gather at a local café bar for a range of promotional pictures.

No need for the writer at this, so I’m only there in spirit (but actually snuggled up in bed). 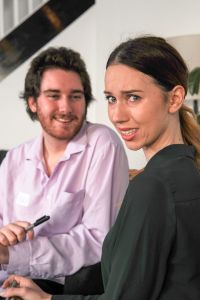 Mike explains the joy of filling in tax returns to Jacqui

Also filmed are a series of “dating videos” that the cast have devised for their characters. These will be sent out to t’internet in a variety of social media ways.

All involved have of course been duly posting and re-posting on our various social media peccadillos, liking each other’s items so as to cross-post and expand the echo chamber.

[Like] it or not, this is how humans do a significant part of their social interaction nowadays.

“Do we have any flyers yet?” I asked.

We’re in the digital age now, where the aforementioned cross-liking of social media items means Spd D8n is constantly flitting across newsfeeds between the fake news and viagra adverts (or maybe that’s just mine), garnering more eyeballs than any ignored old flyer sitting on a cluttered noticeboard could ever hope for. 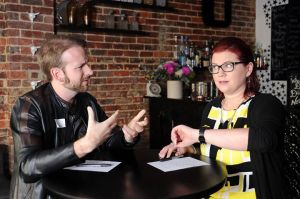 But there is still a non-Facebook crowd out there, whether simply non-tech folk or conscientious objectors.

You forward them a Facebook link and they frown at you.

Not in emoji. A real proper frown, as though you just sneezed on their hand.

They’ll have none of your “But it’s on Facebook” nonsense.

And sometimes when catching up with folk, it’s so much easier to fling out a flyer or two. Especially if you did actually sneeze on their hand and don’t have any tissues.

Bump in and tech cues:

This is a big one. 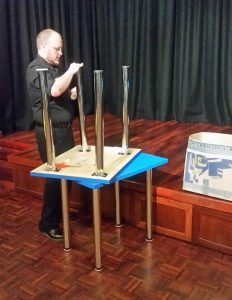 At last our booked slot has arrived in the venue’s myriad array of activities – chair yoga classes, bingo, RSL meetings, square dancing, and other mysterious pursuits of the elderly.

The lighting rig is tested, the tables are set on the stage, and access spaces are paced out for fit.

By now, scripts are expected to be memorised, and tentatively tried out in the performance setting.

… unless you’re the writer with a brief cameo, who can swan in quite late, conveniently around the time the pizzas arrive.

“We need a press release to send tomorrow,” Therese says midway through the second run. 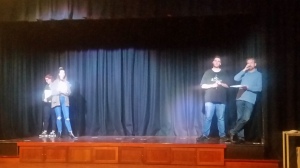 I glance at my watch. 9pm Sunday night.

The actors have been here since 3pm, the director 11am.

Whereas I’d barely managed to slob out of bed in time to watch the noon football match in my underpants*.

* Note for grammar pedants – the match was held in a reputable sporting venue, not in my underpants, which are generally unavailable for public recreational purposes.

Duty bound, I bang out a press release and away it winged the next day. I’ve been meaning to write a sample PR for my fledgling writing services business, so that’s two birds with one stone.

And so, the tech run, where effects cues join the costumed actors for a full run of the play.

Actors blink in the spotlights, delivering lines at performance pace, actual sounds occurring rather than someone just making odd noises. 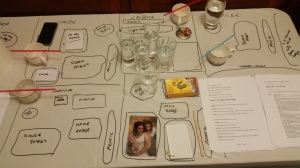 The prop table is policed with ruthless efficiency by Lorna, herding bewildered actors to their cues and entrances.

The green room is a slightly nervous atmosphere of circling actors silently mouthing lines and indulging in really quite odd warm-up routines. It’s becoming more business-like, and the nervy energy will build in intensity as opening night approaches.

And then, … that’s it, besides emergency line runs for the paranoid.

Nervous, yes. Though far more for the actors getting up there to do it. Every rehearsal, I’m relieved to no longer put myself through such bravado feats of memory. I salute you, guys. And apologise again for the “Ethical Non-monogamy” scene.

But on the whole, I’m feeling content. The cast and crew have a buzz of focus and energy. Therese has corralled a great team to bring this off.

All it needs now is a crowd to come see it…

Next time: Up, up, and away. The performance begins. 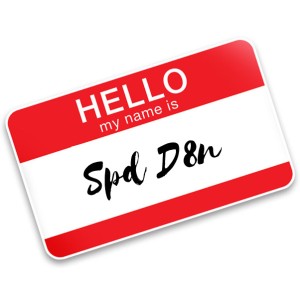