The Tyranny of Boxsets

I finally caught up on some tv series recently, allowing entry into that blissful state where the merest risk of spoilers no longer requires running out of the room with ears covered. It lasted all of a week or two before the new series of Game of Thrones arrived. Excuse me while I cover my ears, and type with my nose.

I am the One Who Knocks … to be let out, then to come straight back in again five minutes later

Breaking Bad I had held off from, to cling tenaciously to a world where there was still more Breaking Bad to see. Sorta like Shroedinger’s cat having HBO inside its box, and hence having no reason to escape its fate.

I go the occasional boxset binge, so as to contain the guilt of not doing something more productive into reasonably controlled bouts.

“But it’s the 21st century,” you cry. “Get with the streaming already.”

Gawd no. I got rid of my tv years ago to avoid plonking down and watching any old keck that was on. It’s enough strain defying ABC iView and Youtube, without even considering the arrival of Netflix in Australia. Boxsets at least allow a modicum of discipline.

And so we come to The Walking Dead.

I persevered through series two, sympathising with the writers’ plight of double the episodes on half the budget, despite it largely being a bunch of annoying people bickering on a farm for 12 episodes.

Series 3 was enjoyable, despite watching Charlie Brooker’s “A Touch of Cloth” at the same time, which mercilessly satirised a particular cliche/trope that was prevalent in Rick’s story arc.

But in catching up on series 4, in order to not be too spoilered by series 5 whispers, I think it’s time to draw the line.

The reason? One of my pet hates: Plot driven by people doing spectacularly dumbarse things.

Meanwhile, back at base, everyone is incredibly blase about life in general. Is that hubris I can smell in the air, besides the rotting flesh?

Which demands of me to ask: Where the hell are these people’s risk management protocols?

You live in a story universe where a person dying will quickly turn into a flesh-eating horror. Surely then, you’d keep a bit of an eye on anyone even remotely off-colour and, like, isolate them or something. Say, in a prison cell, given you’re camped out in a massive jail.

For that matter, all it would take is to slip on a freshly mopped floor. Or indeed, trip over the mop.

Hit your head on tree branch.

The modern non-zombie world is pretty trecherous at times, so the logistics of living in the world of The Walking Dead is an Occupational Health and Safety nightmare.

Yet, everyone blithely roams about by themselves, for lonely, wistful rememberances of fallen loves, their subsequent hasty beheading of those loved ones, or heavy philosophical musing oblivious to walkers lumbering up on them.

It’s an accident and subsequent disaster waiting to happen. Travel in pairs for pity’s sake! Keep watchful about each other. Don’t mop floors without putting out a number of “Slippery Surface” signs in appropriate places.

It seems to me, come the zombie apocalypse, your best bet is not to stick with on-the-edge policemen, survivalist enthusiasts, or superficially charming governors, but to hook up with OHS officers.

They know where lean a mop where it won’t cause a sudden outbreak in your midst, or will stick a “Mind Your Head” on low door beams and the like. Even the odd “Careful now” wouldn’t hurt. Human survival is at stake people!

No, without due risk management, observe common sense safety practices, or even simple precautions being observed to even a basic level, I’m afraid this is where The Walking Dead and I have to part ways. It’s the same problem I had with the film 28 Weeks Later, whose plot is triggered by two kids doing something spectacularly dumbarse.

At least abandoning them to their fates saves me a good ten or so hours per series, time I could more productively use for writing.

… Though, I have been meaning to check out House of Cards, just to compare Spacey’s version to the brilliance of Sir Ian Richardson’s Urquhart. 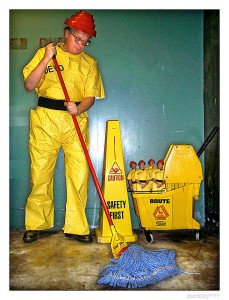 If a Problem Comes Along, You Must Mop It

Disclaimer: Okay, so I work in a Risk Management company, and get a little het up about these things. But mops, man, how hard are they to put away?